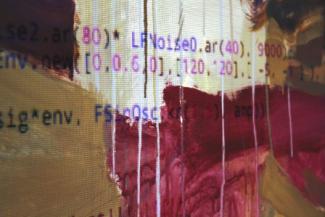 This research project develops a methodology for an aesthetic exploration (or perceptual) of the sonorous spaces generated by algorithmic composer systems.

Ivan Paz’s project outlines a methodology for an aesthetic exploration (or perceptual) of the sonorous spaces generated by the different parametric combinations of algorithmic composer systems.  According to this, it uses linguistic rules,  rules as “if A parameter values “x” and B parameter values “y” , hence the outcome “w” is “z”. These rules are humanly interpretable.  It seeks the interpretability because it wants that rule systems might be used during live writing, alteration and execution (live coding) of the algorithms. The rules come from a data set composed by different parametric combinations. The combinations are assessed by the user, with his own aesthetical criteria, to determine if they show or don’t show a musical feature previously determined. The modeled features are musical traits of high level, meaning features which can be obtained or described in terms of minimal data representation, such as parametric terms and its combinations.

The project looks at different algorithms (based on different criteria), to draw a compact set of rules with enough descriptive power from the assessed cases. These processes allow the representation of the assessed cases alone, or the attempt of spreading the knowledge, predicting the parametric combinations traits which still have not been assessed. To this end, it analyses the assessed set of data using different methods to deduce what conditions must comply with the cases to show or not show the property. The method’s effectiveness depends on the variation in the acoustic perception when listening to the parametric spaces.

The process is made by an interface which goes with the composer/performer in the process of sonorous exploration and in the generation of rules. The interface allows the listener to focus on the sonorous perception during the assessment process (holistic listening) and take analytic decisions during this very same process of generation (analytic listening).